Windermere Living: Board it Up

For an intimate gathering or celebration, or just to change up a weeknight dinner, charcuterie boards are impressive crowd-pleasers.

Once an innocuous appetizer, charcuterie boards are stealing the show as stunning smorgasbords studded with salami roses and a rainbow of ripe vegetables, flamboyant fruits, and sweet and savory snacks. Traditionally, charcuterie boards are composed of meats and cheeses—the name even comes from the French for “cooked flesh.” A part of French culinary art since at least the 15th century, they were considered the food of the bourgeoisie for hundreds of years before catching on with higher-end cooks. Now, they return to accessibility as people find ways to customize their boards and feature all sorts of spreads. Trays and wood blocks can be artfully piled with everything needed for a build-your-own brunch buffet, a vegan midday meal, or an elegant soirée starter. Boards tap into a host’s creative side as an easy, fun way to put out an incredible spread that pleases every type of person. “I love making them for entertaining,” says Amy Holt of Peas Thank You in Venice, California, “because it’s a centerpiece for conversation.” 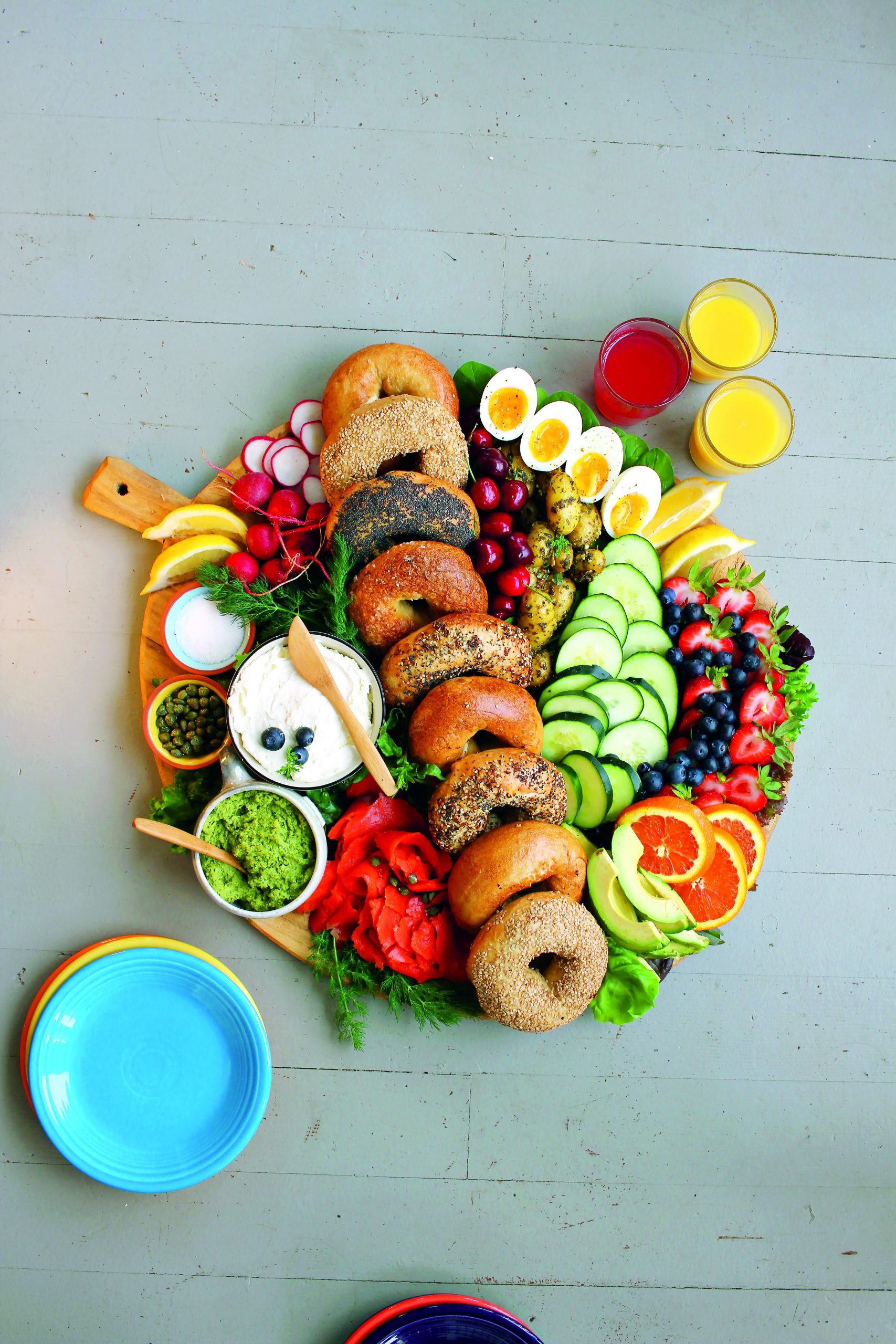 At cocktail parties, casual gatherings, or before a sit-down dinner, charcuterie board–style spreads allow people to create their own bites and discuss what they paired and how they ate it—functioning as both food and icebreaker. The chameleon of catering, boards fit in as easily at a small family picnic as they do at an upscale event, while also giving people more flexibility than a set menu: hungrier guests can make almost a full meal of the offerings, while lighter eaters can sparsely snack. But the ultimate asset of an attractive board to anchor an event is the freedom to indulge artistic whims in building a creative, edible assortment. Expert charcuterie board makers from around the West talk about how they design their signature creative boards with both classic snacks and unorthodox offerings in elegant arrangements for family, friends, and gatherings large and small.

When a client for her charcuterie board business requested a bagel spread for a bar mitzvah, Sylvie Stulic, of the Bay Area’s On the Board Gourmet, saw it as the perfect opportunity to get creative. Now it’s part of her standard offerings, and she’s gained knowledge on the best way to build a bagel board.

The big size and flavor of caperberries always draws wows, says Stulic, while she adds extra brightness with red sweetie drop peppers. “I love to include a floral element,” she says, which may be actual (edible) flowers or cucumbers styled into roses. One standard bagel fixing not found on the bagel boards, though, are onions. “They contaminate the other flavors,” Stulic explains.

Unless the board is enormous, Stulic slices and cuts the bagels in half so that they don’t visually overwhelm everything else. She uses the halves to create a line down the middle and creates symmetry with the colors around it. Aim to keep the bagels surrounded by dry ingredients so they don’t get soggy on the board. For serving a crowd or an event, bagels work well because they are traditionally eaten at room temperature. But at home, she branches out, creating similar breakfast spreads for her family out of crepes, waffles, and pancakes.

The rainbow platters made by Amy Holt of Peas Thank You in Venice, California, stand out for their bold use of patterns, whether as a fun fruit display, a vegan snack selection, or a traditional meat and cheese board.

“Start at the farmers market,” says Holt. That’s the best place to find natural-looking fruits and vegetables, like radishes with their stems and broccolini with flowers. But even if limited to a grocery store, she can look for the same effect with tomatoes on the vine and celery with nice leaves to use as a garnish. Instead of buying pre-sliced meats or trying to slice them at home—especially for small boards that only need a few slices of each type of meat—Holt uses the deli counter at the grocery store, which will cut them to order. Holt uses honeycomb on cheeses and tops a chia seed pudding with toasted coconut to add special touches.

Tips of The Tray

Bring variety in shapes as well as color by cutting and stacking the food creatively: put berries on a skewer, clip the grape bunches into manageable sizes, and fold the meat in different ways. Start with the biggest things first by plating any dips or spreads. Holt uses a coconut chia seed pudding as the anchor to her fruit boards and hummus on her vegan spread. Arrange foods in groups of three, and always use odd numbers, as they are more naturally pleasing to people. Use triangle formations to direct the eye across platters, drawing attention to the whole board, rather than a single spot or line. Finish by tossing a small, attractive garnish all over the board—berries, little tomatoes, or cilantro flowers—to add a decorative touch. 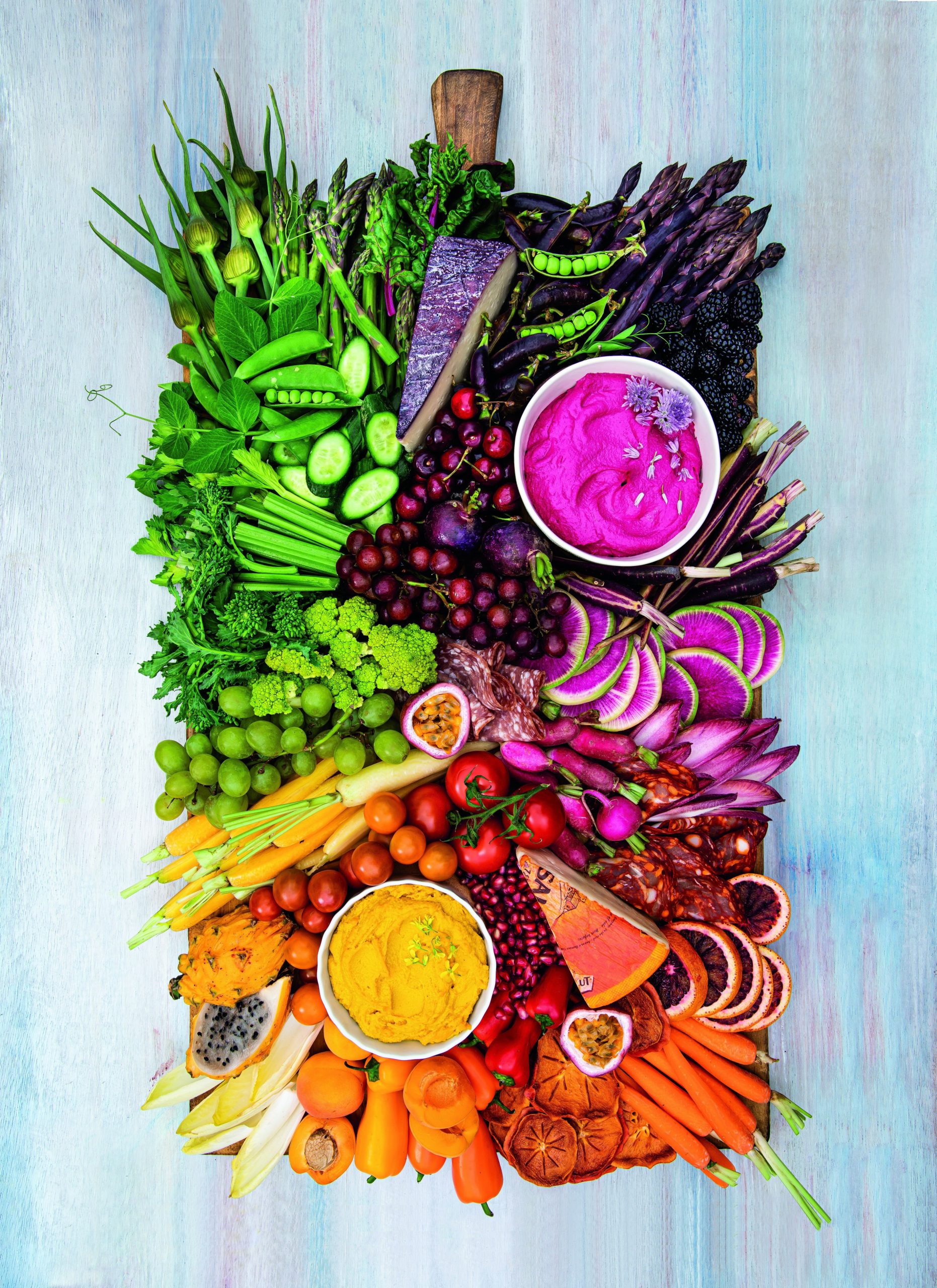 When the fashion industry slowed down during the pandemic and the events Rona Argana once planned dried up, she used her sharp eye for design to craft grazing boxes as gifts to send to her friends. That turned into For Love and Graze, her North Hollywood, California business that spins casual snack platters into eye-catching displays.

Use the green color of leaves to signify freshness, says Argana. She likes mint sprigs in the spring, rosemary and sage in the winter. (Keep them well hydrated ahead of time, so they last longer.) Fancy can still be fun, and she loves to use letter-shaped cookie cutters and slices from a log of mozzarella cheese to add celebratory messages. Savory needs a balance of sweet, so even her traditional snack boards always include a sugary nibble like chocolate-covered almonds or yogurt-covered pretzels.

Start by setting out a neutral color palette of the crackers, meats, and cheeses. Then bring in a limited range of colors, sticking to greens, oranges, and reds. Balance each color with multiple tones and items: use both olives and grapes for green and offset the reds from berries with similar shades of citrus. Most of all, Argana says, don’t forget the purpose of the creation, and consider the flavors as much as the colors: “Make sure it tastes as good as it looks.”

Related Articles
Blog Wildfire Preparation and Evacuation Tips                                       Image Source: Getty Images As wildfires rage throughout the West Coast, many homeowners are being evacuated from their homes, while others stand by for information as the spread continues. The following tips are meant to inform your […]
Blog Preparing for the School Year at Home Image source: Shutterstock For those whose children will be taking classes online or participating in remote learning this school year, keeping the following tips in mind will help create an at-home learning environment that prioritizes health and learning, while being able to adjust to this year’s unknowns. A home cannot fully replace all that a formal […]
Buying & Selling New Year’s Tips for Buying and Selling Now that the end of the year is upon us, it’s time to start thinking about some New Year resolutions. If your 2018 resolution is to buy or sell a home, here are some suggestions to help you along the way. For everyone else, we’ve added some tips about building equity and investing in updates […]